KPM reactors have been tested for heating in KEMA Labs

KPM reactors have been successfully tested for heating in KEMA laboratories Prague in accordance with the requirements of IEC 60076-6 2007 (IEC 60076-6) and GOST 14794-79. GOST requirements are repeated in the current industry standard of the Federal Grid Company (Rosseti) STO 56947007-29.180.04.165-2014. KPM continues consistent efforts of experimental confirmation of all design properties of its reactors. Thorough verification of design of the manufactured equipment by direct tests is the basic approach of KPM.

Why is experimental verification so important? We have powerful computers, so why we just can't calculate and foresee everything? Such questions may arise for many people who are not familiar with the theory of electromagnetic field and the theory of thermal engineering.

In a single-line diagram, the reactor is represented by a single element - inductive resistance. Therefore, even people directly related to the electric power industry (operation, designers) often tend to consider the reactor to be a very simple product.

Up-to-date dry reactors are used in networks of all voltage classes and are designed for high currents to flow through their winding. The actual electromagnetic and thermal processes in the reactor windings are very complex. For such reactor winding processes, it is necessary to take into account that the real parameters are distributed throughout the reactor winding.

Just compare: to calculate thermal conditions of a cable line, its distributed nature is not taken into account. Heating of the cable occurs evenly along the entire length. Therefore, it is enough to take into account the method of laying the cable line and mutual arrangement of phases. The whole calculation is most often reduced to calculating the Joule integral or equivalent current density — the rest of the calculations are very simple.

But this is not enough for the reactor. The lower part of the dry reactor winding will heat the air, which will rise up and heat the upper part. The winding will be heated unevenly. For correct calculation, it will be necessary to take into account the directions of convective flows, while considering the influence of arrangement of structural elements inside the reactor. This is necessary because convective flows will flow around these elements, which leads to uneven cooling of the winding sections. In fact, correct calculation requires solving a complex system of differential equations, which is reduced to numerical finite element methods.

A three-phase vertical structure will have even more complex thermal conditions than a single one-phase reactor. Because the lower phases will heat the upper one with heat flows. We have published a separate article on complexity of vertical reactors design.

Starting reactors are even more difficult to calculate, because their conditions are much more complicated than for current-limiting reactors. The flow of short-circuit currents lasts from fractions of a second to several seconds. And heavy starts of electric motors may last for tens of seconds, while their starting currents are comparable to short-circuit currents. Accordingly, the thermal pulse received by the reactor winding increases many times.

40-50 years ago, it was impossible to make such calculations. Now their availability has increased, although the cost of special software and powerful computers remains significant. But even the use of specialized software systems and powerful computers does not guarantee the correct result. It is necessary to create a correct and sufficiently detailed mathematical description of the design of the electrical device (reactor). Which in itself is very difficult.

That is, in practice, the manufacturer's calculations have minimal significance for the Customer — their verification in practice is difficult. When offering some calculations as confirmation of correctness of the design, a manufacturer actually offers to just believe. And the calculation itself is only evidence of the "trustworthiness".

Physical testing in an independent laboratory sounds much more convincing. During such testing the reactor is tested in full compliance with the standards in a situation as close to real conditions as possible. All its elements experience exactly the effects that exist on a real facility.

Need to say a few words about the laboratory that carried out the tests. This is KEMA labs.

KEMA stands for Keuring van Elektrotechnische Materialen te Arnhem (testing of electrical materials in Arnhem). This laboratory was established in the Netherlands in 1927. Soon this respected laboratory will have 100-years anniversary.

At the moment, KEMA labs is part of the European concern CESI, which is engaged in testing and certification. The concern includes both European and American laboratories that provide a wide range of tests of electrical equipment (insulation tests, current resistance tests, electromagnetic compatibility, seismic, climatic, metrological, etc.). KEMA labs has benches for testing ultra-high voltage classes (up to 1200 kV nominal) and testing with ultra-high currents; has special test benches for various types of equipment, taking into account its features.

At the moment, KEMA labs is, by a number of parameters, the largest in the world and the most trustworthy independent testing laboratory in Europe.

KEMA laboratories Prague has successfully tested two type representatives (with rated currents of 630 A and 1600 A) of reactors manufactured by KPM LLC. The reactors were tested for compliance with the following requirements:

The tests fully confirmed the design characteristics of the reactors. Taking into account the fact that all KPM reactors are designed according to one specification and have the same design, these tests have confirmed correctness of this design.

We thank KEMA Labs for providing these tests and hope for further cooperation! 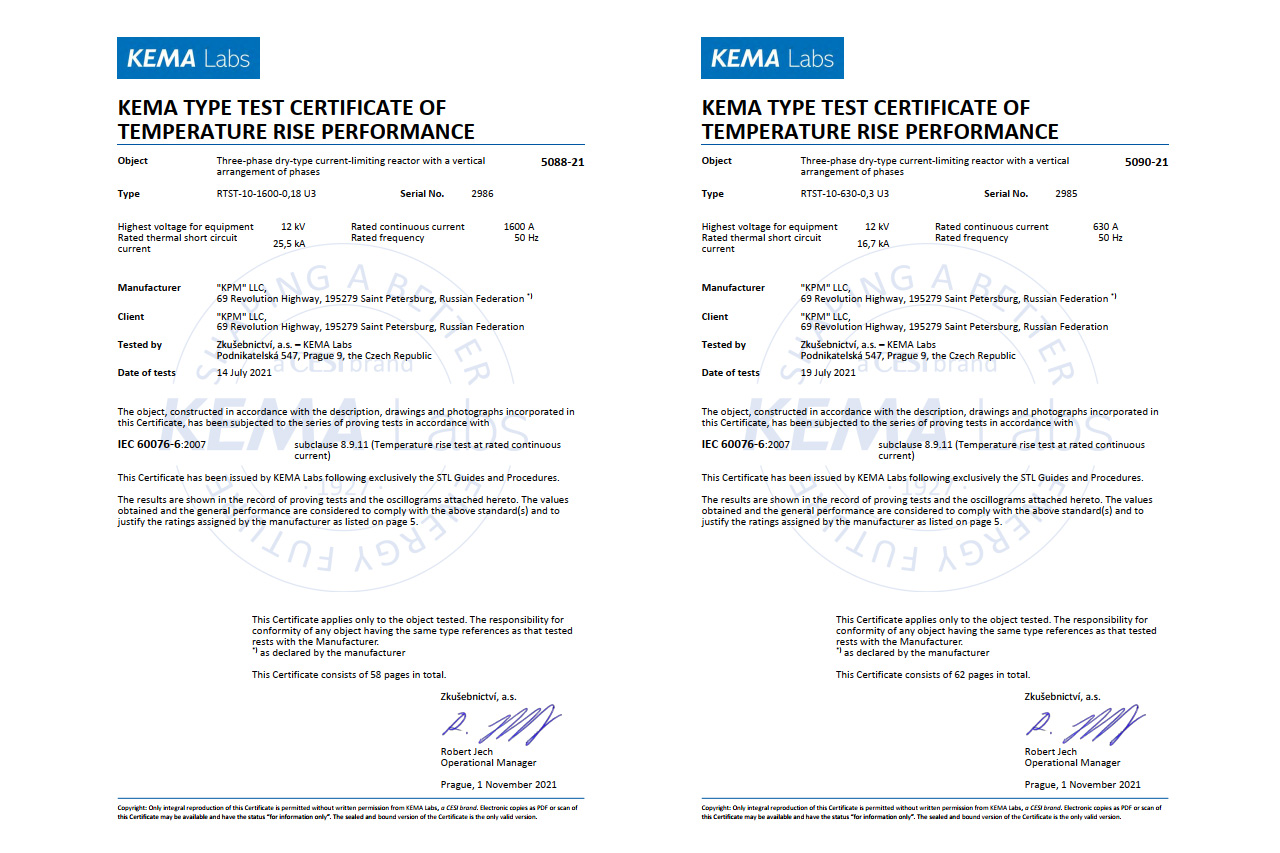